The Archbishop of Canterbury has said he will miss the Queen “hugely”, as he praised King Charles for having “the sense of service and duty, that is the equal of her late Majesty’s”.

Archbishop Justin Welby, who will preach the sermon at tomorrow’s state funeral, said Queen Elizabeth ll firmly believed she would be reunited with her husband, the Duke of Edinburgh, along with her father, mother and sister, when she is laid to rest in Windsor.

He also said he hoped world leaders, gathering at Westminster Abbey for the funeral, would be guided by her example.

The Archbishop told Sky’s Anna Botting he felt “very privileged to be there”, clarifying: “Not pleased to be there, because we would all prefer that this has not happened – we’re all going to miss and grieve for the Queen.”

All latest news, live: Funeral to be shown on big screens across UK

He said the ceremony will be “focused on the family first, because this is a family saying goodbye, at a funeral, to someone they loved”.

The funeral will be attended by more than 2,000 people and watched by billions around the world, making it set to become the world’s most watched broadcast of all time.

The archbishop described the “genuinely shared experience” that people in the UK were feeling as, “an experience of grief, for many deep grief, but also mixed with an experience of immense thankfulness”.

Asked if the role of King was too much for Charles, 73, to take on, in his later years, he said: “It would be too much to expect most people to take on this role at any age, frankly.

“He is a man of very great intelligence, humility, thoughtfulness, commitment to service, who has not just been sitting around twiddling his thumbs, waiting to take on the role.

“As we know, his service to the country and the Commonwealth around the world has been huge. And he’s been thinking about this role for very, very many years indeed.

“From the point of view of the head of state, there’s been a seamless transition – not to someone who’s self-centred or anything like that – but as someone whose sense of service and duty is the equal of her late Majesty’s”. 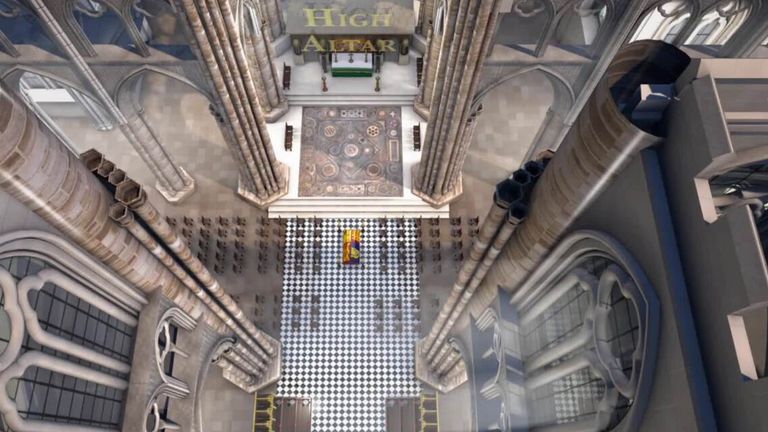 The archbishop described how he last saw the Queen in June, when he gave her a cross of nails, to mark 70 years of unstinting service to the Church of England.

He said: “Her memory was so acute, her observation so perceptive.

“I came back, and I said to my wife, ‘we needn’t worry, I’m not going to have to do a coronation. It’ll be my successor who does that, she’s so fit’.”

The cross of nails has been used as a symbol of reconciliation and peace building around the world.

Read more:
Queen’s funeral plans: Everything you need to know
London to Windsor route revealed where you can see coffin on day of funeral

He said he believes the Queen will now “unite more global leaders, possibly, than at any point in human history”, as heads of state, royal families and government representatives from around the world gather at Westminster Abbey for her funeral.

Archbishop Welby said he hoped and prayed that was a moment “where they will reflect on their own leadership”, looking to her example and taking “a moment where they say to themselves, ‘I would really like people to look on me, in the way that they look on her’.

“She was deeply faithful and faith filled. A demonstrative, quiet Christian, who trusted in the faithfulness of God.”

He said she was now at peace and the nation should “take hope” and comfort from that.

The Queen’s funeral will take place in Westminster Abbey on Monday at 11am.