A UK-French taskforce has been set up to tackle travel chaos in Kent after holidaymakers spent hours in gridlocked traffic trying to cross the Channel last weekend.

The Passenger Working Group has been established to minimise queue times and avoid further disruption for people travelling to either side of the border.

The group will meet weekly throughout the summer to avoid a repeat of scenes last Saturday, when families reported being stuck at the Port of Dover for up to 11 hours due to heavy congestion.

It follows a row over who is to blame for the huge tailbacks building up at both Dover and the Eurotunnel entrance at Folkestone, which has been dubbed the “hotspot of holiday hell”.

The UK has said there are not enough French border officers on duty to process British travellers, while the French say Brexit means passport checks take longer.

Authorities from both countries met this week to discuss the preparations being put in place to ease further disruption, which includes extra traffic enforcement to keep roads passable around Dover and Folkestone. 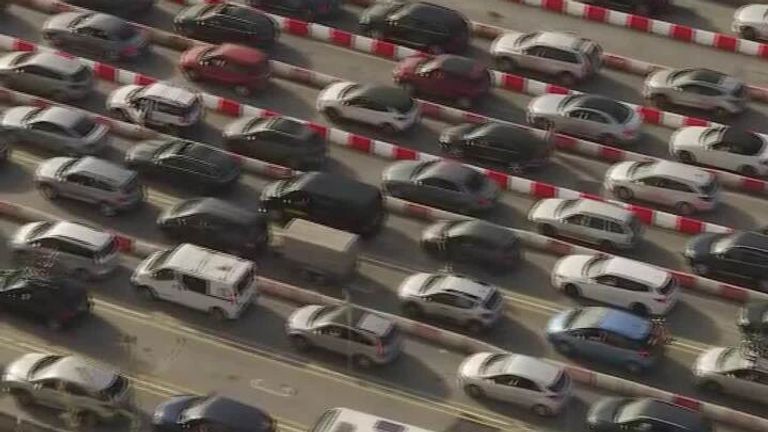 Traffic leading to Port of Dover

The taskforce is part of a package of measures to ease travel disruption after the start of the summer holidays was marred by rail strikes, flight cancellations and border delays.

The AA has issued an “amber” traffic warning for this weekend – the first time it has issued the alert ahead of time.

Roads are expected to be “extremely busy” across Britain due to a combination of factors including train strikes, the start of the English Football League season, the Commonwealth Games and summer holiday getaways.

To ensure people can still easily get to the Commonwealth Games, the government said contingency measures have been put in place, including extra capacity on rail lines that are running and laying on coaches for spectators.

Ministers said flight cancellations have also recently fallen back to their 2019 levels after slot rules were relaxed to help airlines make sensible decisions about their schedule.

The government has faced criticism for not doing enough to get a grip on the chaos, with authorities in Kent calling for more money to handle the disruption.

Chancellor of the Duchy of Lancaster and lead minister for resilience Kit Malthouse said: “I am working with ministers and officials right across government, as well as our partners and industry, to assess and mitigate any disruption, including any knock on effects from the rail strikes.

“We have already taken action, and continue to work with the Port of Dover, Eurotunnel, and the French government, National Highways, local police and the Kent Resilience Forum on minimising traffic disruption, and also with our airport operators to avoid last minute cancellations, and we will continue to take all the necessary steps to help people travel easily.”