A teenager has been stabbed to death and another is critically ill in hospital after a “highly worrying incident”.

Scotland Yard said they found two males with stab wounds after being called to a disturbance around midnight involving a “large group of people” in Lichfield Road, Tower Hamlets, east London.

A murder investigation is now under way but no arrests have been made yet, say police.

The teenager who died is believed to be aged 17, while the one taken to hospital is 18.

Detective Chief Inspector Mark Rogers of the Met’s Specialist Crime Command said: “This is a highly worrying incident that has left one young man dead and another fighting for his life in hospital.

“I am aware of reports saying that about a hundred people, armed with weapons were involved. This information does not appear to be wholly accurate.

“We know a significant number of people were caught up in this incident but not necessarily directly involved or armed with weapons.”

The force said it has has yet to arrest anyone in connection with the incident.

Anyone who has information that can help, including pictures or footage of the incident, is asked to call the Metropolitan Police major incident room on 020 8345 3715 quoting reference Operation Wildcast. 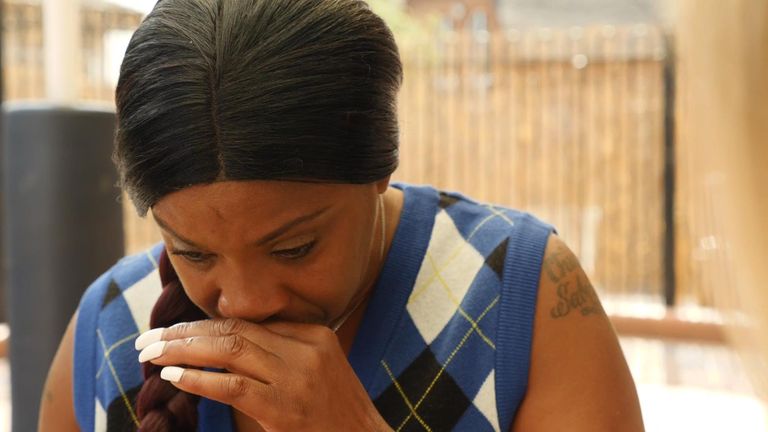 A former Gogglebox star Sandi Bogle has told Sky News she feels ‘sick’ that no one has faced justice over the death of her nephew Bjorn Brown who was stabbed to death in Croydon in March 2017.

The incident comes hours after a boy, believed to be 12, was stabbed in the east London borough of Newham.

The victim was found in Plaistow and treated at the scene.

Two suspects have since been arrested, one on suspicion of GBH and another for affray, the Met confirmed.

Former Gogglebox star Sandi Bogle exclusively told Sky News of her ‘disgust’ that no one has faced justice over her nephew Bjorn Brown’s murder.

Father-of-one Mr Brown was stabbed to death in Croydon, south London in March 2017 and died from his injuries five days later.

Ms Bogle spoke out as new figures revealed 350 killings have gone unsolved in London in the past two decades – including cases in which victims have been shot, stabbed, strangled and drowned.

Meanwhile a former police constable told Sky News how a huge backlog of cases in Britain’s courts – said to be around 60,000 – could be responsible for a drop in people being jailed for knife crime.

Peter Fahy, ex-chief constable for Greater Manchester Police, said: “We need firmer police action, but there is also real concern about the huge backlog of cases in the courts.

“It’s no good police going out to arrest people if they’re then out on bail and it takes years to get people into court.”

A teenager has been arrested on suspicion of murdering a fellow schoolboy in north London.

The unnamed 15-year-old suspect is being held by Metropolitan Police after the death of Deshaun James Tuitt, also 15, who was stabbed in Highbury Fields, Islington, just before 9pm on 4 August.

He died later in hospital.

A post-mortem ruled Deshaun’s cause of death was a stab wound, shock, and haemorrhage.

A 34-year-old woman has also been arrested on suspicion of assisting an offender, Scotland Yard said.

Police have renewed their appeals for information or footage.

Detective Chief Inspector Joanna Yorke of the Met’s Specialist Crime Command said: “Despite these arrests, we are still very keen to hear from anyone who has information or footage relating to this incident.

“We are working hard to piece together a timeline of events that led to Deshaun’s murder and I urge anyone who saw something, or captured footage, to get in touch without delay.

“Deshaun’s devastated loved ones are asking why this happened – if you have information please get in touch and help us to give them the answers they so desperately need.”